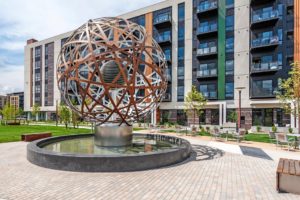 The bridge loan took out previous construction financing on the development and will help facilitate the lease up and stabilization of the asset, which is called Central Park West, located at 1511 Utica Avenue South in the neighborhood of St. Louis Park, just minutes away from downtown Minneapolis.

Los Angeles-based Dekel Capital arranged the debt. Its investment arm, Dekel Strategic Investors (DSI), pumped roughly $15.4 million in equity into the asset in May 2015, according to Dekel’s website. That included a $7.7 million investment and $7.8 million in preferred equity, marking the second multifamily joint venture between DSI and the sponsor of this new loan.

The asset is a 199-unit apartment community designed by Minneapolis-based ESG Architecture & Design. It opened in December 2017 and is 81 percent leased.

The property sits adjacent to The Shops at West End, which is a 400,000-square-foot shopping center that includes a bevy of restaurants, retail shops and also a movie theater. Office Depot, Home Depot and Costco each have outposts nearby the asset.

“Minneapolis continues to experience strong population and job growth, excellent demand drivers for multifamily development,” Dekel Principal and Founder Shlomi Ronen said in a prepared statement. “The employment rate has increased by 1.6 percent over the last year. In addition, this is a highly amenitized community located within 15 minutes of downtown Minneapolis.”

Central Park West includes one-, two- and three-bedroom units and features a clubhouse, a business center, a 24-hour fitness center, garage parking, a golf simulator, a yoga studio, a resort style pool and spa and a rooftop deck, among other offerings. Pinnacle Communities manages the property.

Mountain Capital could not immediately be reached.